Carrie Williams Clifford was born in Chillicothe, Ohio, in 1862, making her a generation older than many of her peers (most writers active in the Harlem Renaissance were born after 1880). For the first half of her adult life, she did not publish poetry.

Clifford was born into a middle-class family; her mother was a successful businesswoman. Clifford lived in Cleveland for some years, before marrying William H. Clifford, an Ohio state legislator. Clifford was active in Cleveland with the National Association of Colored Women, and played a leadership role in that and other organizations focused on African American women's issues. Clifford was also an editor of the Cleveland Journal, an African American-oriented newspaper. In 1910, the couple moved to Washington, DC, where the Cliffords hosted gatherings with many prominent African-American activists, including W.E.B. Du Bois, Alain Locke, Georgia Douglas Johnson, and Mary Church Terrell. 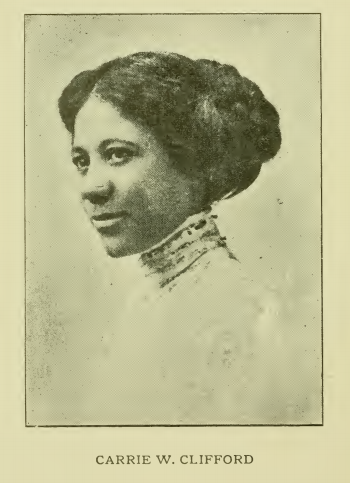 Among the collections of poetry we have been reading while developing this archive, there is no doubt that Clifford's Race Rhymes (1911) is among the most forthright in its commitment to activism and racial justice. While Georgia Douglas Johnson and others aspired towards a certain level of polish -- perhaps influenced by critics like William Stanley Braithwaite -- here Clifford is first and foremost interested in producing verses that speak to the social issues of her day. In her preface to this collection, Clifford says as much: "In giving to the world this brochure, the author makes no claim to unusual poetic excellence or literary brilliance." This disavowal is arguable, though what is not arguable is how powerful Clifford's voice is in this work as well as her subsequent collection, The Widening Light.

In her introduction to a recent edition of Clifford's poetry, P. Jane Splawn wrote of Clifford:

In her poetry and in her life, Clifford did indeed speak with a determination and resolve that would not be quenched by America's accomodationist desires for its black constituency. Clifford was unwavering in reminding America of African Americans' contributions of both their blood and labor for the progress of this country and in warning the 'boastful, white American[s]' who, as she saw it, must one day account to an avenging God for the offenses committed against blacks and other people of color. (Splawn, xvii-xviii)

To this reader, the poems that deal with concrete historical themes are among the most memorable, especially, "Lines to Garrison," "Foraker and the Twenty-Fifth," and "Atlanta's Shame." The first of those three poems narrates, in celebratory fashion, the life of famous abolitionist William Lloyd Garrison. "Foraker and the Twenty-Fifth" is an account of Joseph B. Foraker's contentious political quarrel with President Teddy Roosevelt over a historical event known as the "Brownsville Affair," where an entire battalion of African-American troops was dishonorably discharged by the President for dubious reasons. Finally, "Atlanta's Shame" is a response to the Atlanta Race Riot of 1906, which which left as many as 100 African-American men dead following questionable claims of sexual assault on white women.