Toni Morrison told interviewers she thought that Jazz was her favorite from among her body of work, which may be surprising to some, considering she published this novel shortly after her two great masterpieces, Song of Solomon and Beloved.

As with both of the other novels mentioned, Jazz involves an interplay between the past and present. There’s a mysterious violent event -- the shooting of Dorcas -- that we’re told about in the opening sentences, which much of the novel will steadily unpack. And there are important backstories for all of the characters living in Harlem (and sometimes Baltimore) that usually starts in the South. For Joe Trace and Violet Trace, that starting point is in Virginia; for Dorcas, it’s in East St. Louis, Illinois. So far, so good. (The Virginia back story might recall the backcountry in Morrison's Song of Solomon; readers also learn that Dorcas and her family were survivors of a horrific anti-Black massacre in East St. Louis in 1917 (read more about that event here).

But there are other elements of the book that take us in directions we haven’t seen Morrison go before. For one thing, there is a narrator who jumps into the narrative from time to time, to muse on the characters but also on some aspects of Harlem life that don’t quite connect to the storyline or advance the plot. There’s also a passion for urban style in this book -- specifically Black urban style -- including its fashions, the obsession with music, and the very real emphasis on eroticism and sexual desire, that seems to exceed any links to trauma or violence. In other words, alongside its more serious themes, Morrison appears to be interested in how African American arrivants in Harlem in the 1920s played.

The Seed of the Story: The Harlem Book of the Dead

Readers may be aware that it was Toni Morrison’s work on a collection called The Black Book for Random House in the 1970s gave her the opportunity to do the research in the archives that led to her discovering the story of Margaret Garner -- which would become the seed narrative for Beloved. (Read more about that here.) Something similar happened with Jazz. One of the points of inspiration for the novel is an image printed in a 1978 book called The Harlem Book of the Dead. Morrison did not edit this book of photographs; it was edited by Camille Billops. Apparently, Camille Billops came to Morrison while the book was being developed, and Morrison gave her the idea to ask photographer James Van Der Zee, who had lived through the Harlem Renaissance and knew many of the subjects he photographed personally, to offer a few words of explanation for each of the photos in the collection. For one of the photos showing the funeral of a young woman, he mentioned that the subject had been shot by her lover, but refused to identify him before she passed away. Here is the image as it appears in Van Der Zee's book: 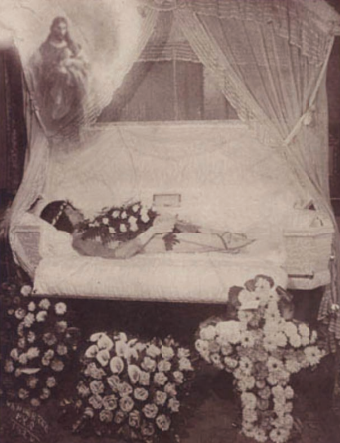 “She was the one I think was shot by her sweetheart at a party with a noiseless gun. She complained of being sick at the party and friends said, ‘Well, why don’t you lay down?’ and they taken her in the room and laid her down. After they undressed her and loosened her clothes, they saw the blood on her dress. They asked her about it and she said, ‘I’ll tell you tomorrow, yes, I’ll tell you tomorrow.’ She was just trying to give him a chance to get away. For the picture, I placed flowers on her chest.” (James Van Der Zee, from The Harlem Book of the Dead, 1978)

Here is another photo of the young woman in The Harlem Book of the Dead: 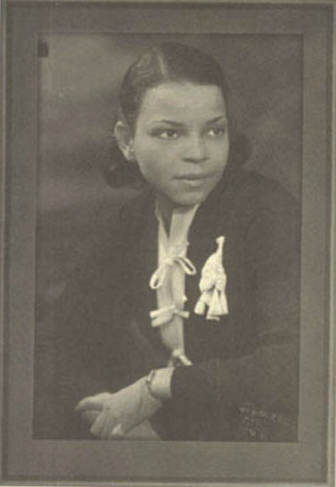 (This photograph was not taken by James Van Der Zee, but it is included in The Harlem Book of the Dead as a counter-point to the image of her at her funeral.)

Jazz as an Homage to the Harlem Renaissance

Jazz is a novel about the Harlem Renaissance, a movement in Black literature, art, and music that started in the early 1920s and began to wind down towards the end of the 1930s. Some of the key names in Harlem Renaiisance literature might be Langston Hughes, Zora Neale Hurston, Claude McKay, Alain Locke, James Weldon Johnson, Georgia Douglas Johnson, and Countee Cullen. (See our sister site: an anthology of African American poetry.) In music, some of the names might be Louis Armstrong, Jelly Roll Morton, Fats Waller, and Bessie Smith -- who performed in live venues especially in Harlem. There were also breakthroughs happening in Black visual arts, theater, and dance. The popular culture of the period was also infused with a new, often scandalous openness about sexuality and desire.

The intrusive narrator in Jazz enables the novel to offer a historical awareness of the aesthetic breakthroughs that are flowering all around, specifically in Black culture. None of her main characters in the novel are themselves artists or performers; they’re ordinary people who hear and are moved by Jazz and the Blues; who experience the joys of ‘free’ urban life in New York as in the 1910s and 20s. But through the narrator's commentary, Morrison gives the reader a way of breathing in that fresh air of aesthetic experimentation and that explosive energy. (And admittedly, several of the older characters in the book are scandalized by the new fashions and popular culture.)

Jazz as an Homage to Harlem: the rise of the Black Metropolis

In addition to it being a celebration of Black arts, there are many passages in Jazz that suggest a celebration of the space of life and possibility the emergent space of Harlem represented for Black folks in the 1910s and 20s. An important part of the story here is the “Great Migration” -- a massive movement of African American people from primarily agrarian and rural areas of the South to Northern cities, which started in the 1870s and 80s, but continued through the Great Depression of the 1930s. We see traces of that movement in The Bluest Eye and Song of Solomon -- both involving Black families who moved to the northern midwest from the Deep South. We also see the prehistory of this migration pattern in Beloved -- it started with the Underground Railroad and the association of going North with moving towards freedom.

Of course in those earlier novels, the families involved are moving into predominantly white cities and experience some challenges as a result. The Breedlove family, for instance, essentially falls apart in small-town Ohio in a way that it might not have had they stayed put around Pauline’s extended family in Kentucky. But what happens when a couple like Joe and Violet Trace (in Jazz) move from Virginia to New York City? And not just New York City, but Harlem in 1906? The sense of possibility is very different. There’s a real sense of a new way of living that’s in the air.

It’s probably worth mentioning at this point that “Harlem” wasn’t always Black-majority: that actually happened fairly quickly. Before Black folks started moving there in large numbers, it was an immigrant neighborhood with large numbers of Italians and eastern European Jewish people. (There’s even a book about this early history, Jeffrey S. Gurock’s When Harlem Was Jewish: 1870-1930).

Sex and Violence in Early Blues and Jazz

The themes and lyrics of early Blues music are much edgier than one might expect. Many people today have the idea that jazz is a kind of easy listening music, but in the 1920s, the reality was quite different. Black music was largely listened to in underground speakeasies (this was also the era of Prohibition). In the novel, we see hints of the ecstatic embrace of the new music in the example of the girl Violet encounters early in the novel who leaves her baby with Violet, a stranger, while she runs up to her apartment to get a record she wants to play for a friend. The record is named in the novel (Duke Ellington's 1926 "Trombone Blues").

Sexuality was, of course, a big part of the appeal of the new music and nightlif. In the novel, Alice Manfred recalls hearing a song, “When I was young and in my prime, I could get my barbecue any old time.” A critic writing about this line didn’t offer a citation, and the lyrics may be invented by Morrison, but a point of comparison might be Robert Johnson's, “Phonograph Blues”:

Beatrice, I love my phonogra’-ooo

Honey, you have broken my windin’ chain

And you have taken my lovin’

And given it to your other man

Now, we played it on the sofa, now

We played it ‘side the wall

My needles have got rusty, baby

And it will not play at all.

The double-entendres in the lyrics above are highly suggestive, and this song was not at all unusual in covering this type of material. (Also see Bessie Smith's scandalous "Kitchen Man")

Besides the sex, there’s a fair amount of violence in these songs, sometimes represented playfully, but sometimes deadly serious. One of those might be George Williams and Bessie Brown’s duet “Hit me but don’t quit me,” which is directly cited in the novel & where the lyrics are essentially what the song’s title might lead us to expect. (There’s a bit of play in the song as to whether “hit me” refers to domestic violence or sex. “I’ll hit you any old time, but I won’t quit you,” George Williams says, affectionately.)

The young people of the 1920s -- white and Black -- saw themselves as in the middle of a sexual and aesthetic revolution: they were breaking the chains of Victorian limits on their lives. The new values and freedoms associated with Jazz music were a bit part of that revolution.